Oh Standfast is the stage name of Graham Goddard, a London-based performance poet and ranter who I’ve known for the best part of a decade. Oh Standfast has shared bills with cult comedy forces such as Tony Law and Kunt and the Gang, plying his trade at venues throughout the UK. I caught up with him to talk ranting, books, social media and the live entertainment scene.


How would you describe Oh Standfast to a complete newcomer?

A bearded performance poet and shouter of words who you will hopefully find funny or at the very least entertaining. 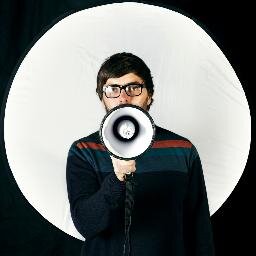 How did you get into ranting?

Having spent most of my working life in data entry definitely helps but things really kicked into gear when I found myself unemployed living at my uncle’s in East London.

I would walk aimlessly for miles around the city looking for new places and people watching. The fact that now at 32 years old I can stand in the corner of a pub onstage with a megaphone and say what I think without getting chucked out is brilliant.

What are your main sources of inspiration?

People, passengers, colleagues, myself and a worry that the idea of the future could actually be quite dull if we all continue to sit in silence gawping at a phone waiting for someone to tell you that they like you.

Who are your key poetry/ranting influences?

Has the internet played a pivotal role in your success so far? Would you have struggled without it? Would you say that YouTube has helped?

You’ve written about your dislike for the way in which people seem to have an insatiable need to document everything via social media – why do you think this is a bad thing?

I would be a hypocrite if I slagged it off completely as I use Twitter etc to my advantage. It’s a great free tool to promote gigs and keep directly in touch with fellow performers, promoters and fans. I do feel that the rise of social media is killing conversation and physical interaction, which is a real shame.

You’re currently promoting your book ‘Don’t You Wish Your Kindle Was A Book Like Me’? What can anyone unfamiliar with your work expect from it?

It has actual pages that you can turn and includes a selection of mostly good-humoured rants and rhymes. The book also includes great doodles of me by my good mate, illustrator and jam maker Chris Sav. It is pocket-size for convenience and all profit made goes to charity… what a guy!

What would you say are the merits of physical books versus their digital equivalents?

I am not actually a big reader of books as I don’t really have the patience to sit down for long enough but I’m working on it. My biggest gripe with the rise of the digital book is that it gives people yet another excuse to fixate on another bloody screen! I think using an eReader is more like reading an elaborate email than a novel.

When I first met you, you were heavily involved in promoting gigs. Are you still involved in this? Is it harder to get audiences out to gigs – or indeed any other live events - in the current economic climate?

I haven’t been in the promoting music game for a while after deciding to concentrate on my own projects. There are so many band nights in London that it was became too stressful and risky to compete for audiences and to keep the venues happy etc…plus I eventually ran out of money.

No matter how good your poster is or your line up is you cannot force people to go out and inevitably if you go to a gig you will find you have to spend at least 30 minutes listening to a band you don’t like, which puts people off, I think.

I prefer to not have that pressure to be honest but I learnt a lot during that time and it has helped me as a performer to have had an insight into the live industry.

You’ve set some of your spoken word material to music before, is this something that you will consider doing again?

It’s not a priority for me but should the opportunity arise I certainly wouldn’t turn it down.

Tell us about your work for the charity C.A.L.M.

I first became aware of them because I was intrigued by their name - Campaign Against Living Miserably - which I though sounded like the title of a Morrissey album. I visited their website and found out that they focused on male suicide prevention and I was shocked to discover that suicide is currently the biggest killer of young men in the UK. I volunteer as much as I can and all profits made from my book sales are donated to the charity.

Are there any other names in the circles that you frequent that you can recommend?

Rob Auton and Jack Rooke spring to mind but there are loads of great new comedians and poets out there at the moment. Many of the gigs are free too, so people should get out there and see for themselves.

What are the future plans for Oh Standfast? What have been the highlights of your career so far?

The plan is to keep going and do as many gigs as possible, if I’m knackered by the end of the week then that’s a good sign. Highlights so far include Latitude 2012 and performing on the same bill as Paul Foot and Tony Law (I’m a keen fan of both). Ultimately with fear of sounding a bit naff, I just enjoy making people laugh.

Thanks, Oh Standfast!
Posted by David Lichfield at 12:22 PM No comments: